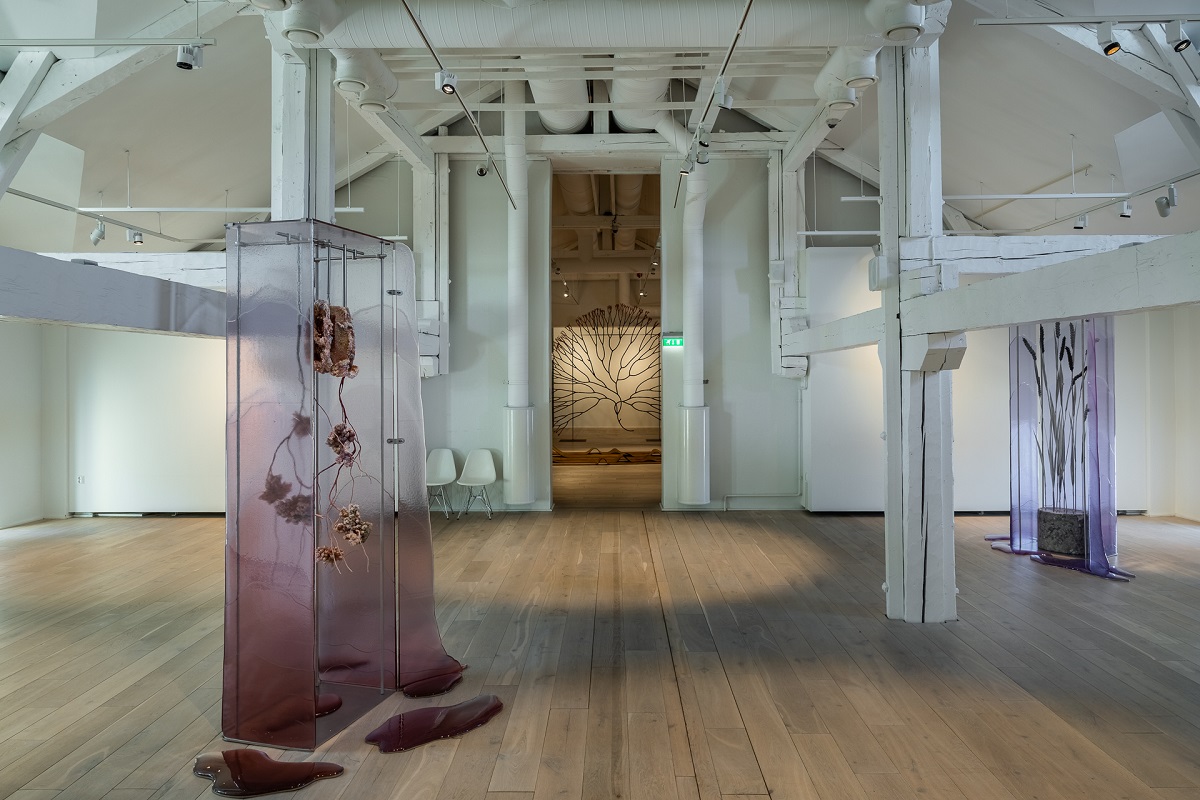 After Kiasma, the Nordic Pavilion at the 2019 Venice Biennale, can be seen in Vaasa at the Kuntsi Museum of Modern Art. The exhibition examines the relationship between the human and nonhuman in an age when climate change and mass extinction are threatening the future of life on Earth. The coexistence with other life forms has become a current topic when the presence of microbes in our bodies is a burning issue and the inflammatory state extends globally to society as a whole.

The featured artists give visibility to life forms that are easily disregarded by humans. Organisms such as microbes, algae and insects live in our midst, yet they often remain imperceptible due to their tiny size or slow rhythm. These nonhuman creatures are both the subject matter and co-creators of the artworks in this exhibition. Weather Report invites visitors to harken their senses to the coexistence of humans and their more-than-human neighbours and also to reflect upon the relationship between their own bodies and other life forms.

Finnish artist collective nabbteeri, who lives in Ostrobothnia, represented Finland in the Nordic Pavilion of the Venice Biennale in 2019. The exhibition space is a key element in their work. They gather the materials on site and incorporate recycled objects that evolve into mesh-like installations. Their works are compositions based on interactions between the artists and other things, including nonhuman organisms.

In the Nordic Pavilion, nabbteeri formed an ensemble of intertwined elements, which explored the materiality of the Pavilion and its surrounding garden. In Kuntsi, nabbteeri’s artwork reminds of the presence of other species in an artificial environment. For example, the work shows a different kind of life suitable for the museum environment through plant cuttings. The video included in the installation is based on nabbteeri’s diary entries on the closeness between species.

Norwegian Ane Graff creates works that combine her material research with a broad range of research disciplines, e.g. microbiology and chemistry. In her work, she applies a reassessment of material reality made within the framework of feminist neo-materialism, in which the matter is approached through relationships. Through her installations, she confronts the allegedly stable, science- and culture-based classifications, while asking how notions of human exceptionalism and dualistic thinking are connected to the ecological crisis.

The states of inflammation in Graff’s works refer to the connections between climate change, Western societies driven by economic growth, the extinction of immune-modulating intestinal microbes and the spread of inflammatory diseases. Her installation makes observable how the human body is entangled with other agencies, such as bacteria, as well as the toxicity of the environment.

Swedish Ingela Ihrman weaves together imagination, craft techniques, as well as sensibilities and personal experiences in her objects, moving images and texts. Drawing on the feminist performance tradition, she uses her own body to critically analyze the dichotomy between culture and nature. Relating one’s own body to diverse material worlds or emulating their cycle of life can foster an enhanced understanding of life’s various entanglements.

Her algae installation tells a story of the liquid origins of human bodies and the existing connections between diverse lifeforms. Silent, large-scale objects invite the exhibition visitors to partake in a bodily experience. By allying with worlds commonly considered others, it is possible to transgress limiting concepts and to reconsider notions of belonging and co-existence.

The exhibition is curated by Kiasma’s director Leevi Haapala and curator Piia Oksanen. Weather Report had its debut in the Nordic Pavilion at the 2019 Venice Biennale. The exhibition was produced by Kiasma and staged as a Nordic collaboration between Kiasma, Sweden’s Moderna Museet and the Office for Contemporary Art Norway (OCA).